A year of losses

Yes, we went from very significant rain, flooding, and mudslides a year ago, to caring for and losing my mom late in the spring, to California’s biggest wildfire in December (The Thomas Fire), to a debris flow in January unlike anything we’ve ever seen here in Santa Barbara. We’re talking biblical proportions. And the fire hit right at the worst time… during the holidays. We had to evacuate our home and place of business at a crucial time and try to carry on as best we could. When the debris flow hit, it ripped out our water pipes from our home. We were without water for two weeks, sheltering in place. We lost power for about three days at the beginning, gas lines were off, and internet down most of the time. By the time they lifted the roadblocks to our house, we were pretty shellshocked. We are now getting our mail and garbage service again after a hiatus of 3 weeks.

To give you an idea of what debris flows can do, read this article I found from The New Yorker Magazine.

Twenty-one people have been killed in the debris flow (including a friend who wanted to get our grandkids together at the pool) and two remain missing. It was absolutely devastating. Homes were swept away and businesses have suffered even more in the aftermath of the fire and while much of the area was closed due to damage from the debris flow. The dump trucks that helped clear the closed freeway for a couple weeks are now taking mud from up our way. It’s going to take a long time to clean up the mess created by the Montecito natural disasters.

A few photos of the wreckage 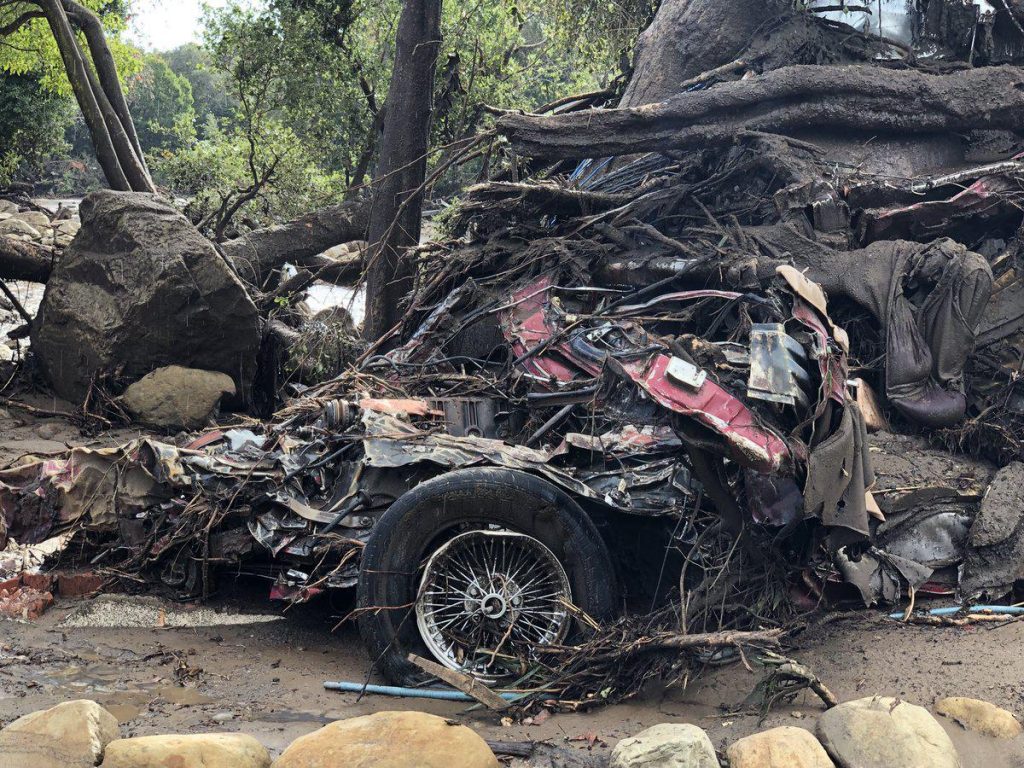 On a positive note, I was able to set up a display area at A Crimson Holiday and sell my products to locals. They were able to see all the greeting cards and postcards up close and personal for three months while the store was open. We just closed on January 31st for the season, and I look forward to doing it all over again November 1st… without the Montecito natural disasters.

I met lots of nice people through all this, and the love shown by everyone in the community was amazing. Some good friends took us in when we had to evacuate in the middle of the night during the fire. They even took in our dog. A few days later, we were all evacuated from their house and had to find somewhere else to stay. A friend and her honey, whom we had never met, invited us in to their home. They took wonderful care of us and absolutely adored our dog. Plus they even let us set up shop to do what we could to keep our businesses afloat. So we have a lot of wonderful memories thrown in with the disasters that almost took our house… twice.

The creative juices are flowing

Yes, this past year has been a case of perseverance in the face of Montecito natural disasters. But I’m hoping things can get back to some semblance of normalcy now. After the debris flow, I decided just to go to my creative place in my mind and put my worries aside. I started creating things with polymer clay, mostly pens, and I also started creating some fun jewelry and made more guitar/amp-themed bolo ties for my Love from Santa Barbara business. I also got a couple new cards printed up… one of the Sunken Gardens and SB Courthouse and the other of a serene scene with Shetland ponies and a donkey with vineyards and the Santa Ynez Mountain Range in the background.

So now, I’m just catching my breath and I wish you all the best in 2018. Clean slate, anyone? Um, yes please!

Can’t find where to leave a review? Go to the product (you can enter it in the search bar above), then scroll down to the product Description and click on the Reviews tab right next to the Description tab. Click on the number of stars (if less than 5, let me know any problem you might have), then leave a review. If you’d like to leave a general comment, just visit the Contact page and leave your comment there. Thanks so much!